About a month ago I got an idea to start running again. I really haven’t run since I had my vein surgery sound the end of 2016. I stopped running for that, then we were selling the house and then we moved... and then I TRIED to run here once and omg the hills. Nothing but hills. But then I discovered the trails here and I started getting excited about running again. So the day I decided to run was also the day I signed up for an ultramarathon.

Literally I went from doing nothing for over a year to signing up to run 31 miles! I’ve never run a marathon, just a half in 2016. I realized running is only appealing to me when done in nature with trees and dirt and wildlife. Most marathons are in cities with 10,000 people, on roads and blah blah blah.

So that’s why an ultramarathon was on my radar. They are typically on trails and in the woods. Anyway, there are no couch to ultramarathon programs out there for just under 6 weeks, so I had no schedule to follow. I just trained on days I felt like running and ran as far as I felt like I could. My longest training run was 12 miles. So on race day, I had to run well over twice that amount.

I ran as fast as I could, which was slow. It was muddy and raining. I fell twice and put holes in my favorite pants. Around four hours in my hands were so swollen that I got extremely worried. I ate two Gu packets an hour and drank a bottle of water an hour also. I also had a banana and a few figs along the way.

It took me 6 hours and 40 minutes. I beat my goal of 7 hours and did something I once thought was impossible.

It felt pretty good to complete a goal. I haven’t set many personal goals lately... busy doing things for the kids mostly...

Anyway here I am at the finish line. I had a few tears of joy... 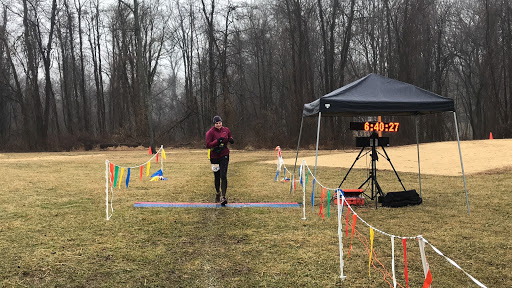 My watch shorted me half a mile and I forgot to stop it at the end: 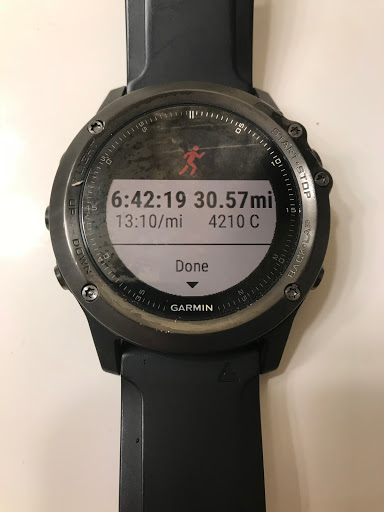 So now I’m taking a break for a week and planning my next race. I’m so thankful to everyone who helped me accomplish my goal.