Oh. My. Gosh!!!!
I took my children to Orlando by myself and the trip was wild to say the least.
I tried to come up with some free things to do to make the trip less expensive.
One thing I found was that the Wilderness Resort had a few inexpensive things to do and it is a great place IF you are camping there AND you've rented a golf cart. But I did neither of those.
here's the story...
We got to Orlando to check into our hotel. Of course it was the WRONG hotel and I had to go an extra 30 minutes away to get to the right one. not easy with a bunch of kids who were already In the car for nearly three hours. So we decided to skip check in and head to the Wilderness Campground. We planned on riding horses and then going to the campfire at night with Chip and Dale.
We'll, everything was far away from everything else. Lots of walking. Lots of bus riding. Lots of crying. So after a 3:30 hr car ride two far walks and a 30 minute bus ride we finally get to the horses as the attraction was closing only to discover that I needed to pay with cash. Of course... I had no cash. So I lug everyone on another long walk to the ATM only to discover I lost my ATM card. My kids were going crazy while I was trying to figure something out. A staff member came over to entertain them while I tried to figure out what to do. Finally!!!! I found one of my cards that I could use at the ATM and we walked back to ride the horses. Happiness at last: 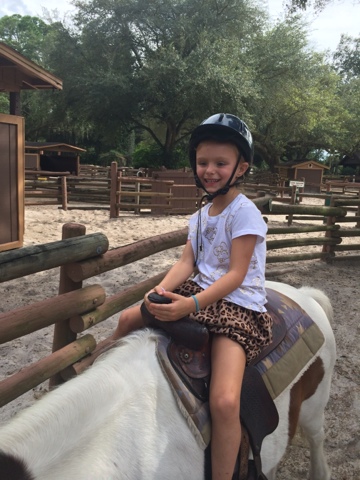 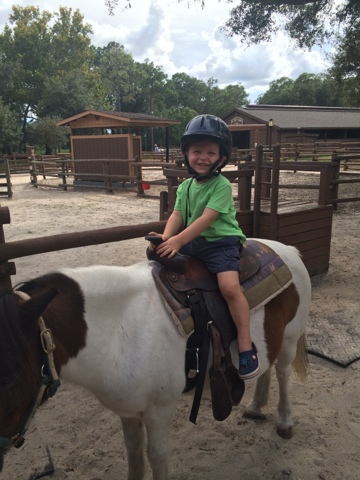 That was a fun time. We had some time to kill, so we got something to eat and walked to a far away playground before walking all the way back to the bus stop and riding all the way back to the parking lot to get to the car to get cleaned up.
Now, my son was unmanageable on the bus. If Boss would have been there, it would have been easy peasy, but he was tired and overwhelmed and I could barely keep him from a meltdown.
It. Was. Stressful.
We got cleaned up at the car and probably looked like crazy people because I was changing them and feeding them in my car right near the RV parking and I was imagining people thought we were camping in our car.
Anyway... Here's how it all went from nuts to insane:
We rode the bus AGAIN back to the place where the campfire with Chip n Dale was to be held. We were about 30 minutes early so no one was there. And all of the sudden. It rained.
POURED.
Hard as rain could fall. And there we are, me and four kids standing in an open field.
My Princess protested the rain and sat down, arms folded. She wasn't leaving.
Drenched and holding a baby I pleaded with her to come with me and she agreed...then out of no where came a bunch of peacocks.
And my son went nuts!!! He chased them and they ran. He followed them. They ran further. So running in a wide open field it was the peacocks, my son chasing them, me holding a baby and chasing him, Princess chasing me and Sister chasing her....IN THE POURING RAIN! For a loooong time. It had to be a mile. It wasn't a mile. But it was far. Did I mention it was pouring?
As I was running I was wondering how it was all going to end! Would the peacocks get tired? Would my Son? No way was I stopping.
Well, here's how it ended...the peacocks did a u turn around an RV . They started heading back towards me. My son on the other hand, slipped on the mud while trying to make a u turn and slid down an embankment!!!! It was like a mud slide!!!! Don't worry, it was a short embankment and he was perfectly fine... Just upset that he didn't get to touch the peacock.
So... I scooped him up, now carrying two children and we walked all the way back to the bus...in the pouring rain.
Here's how it all began: 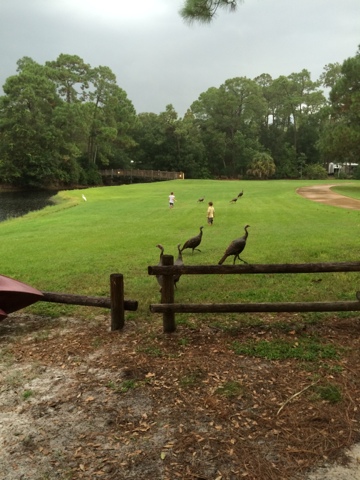 At the bus stop unfazed. 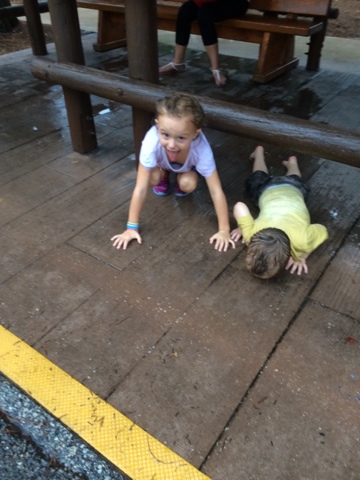 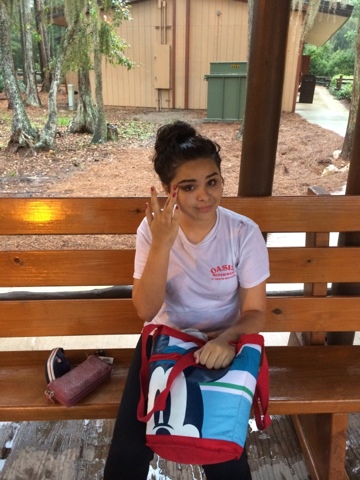 Then I lost my mind further. I took three babies to Downtown Disney BY MYSELF with no stroller. Needless to say this was the only picture I could take amongst all the chaos: 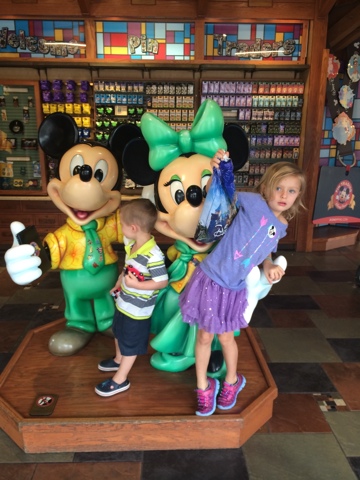 Okay I took one while at Rainforest cafe too, but seriously it was harrrrrrd to manage all three by myself: 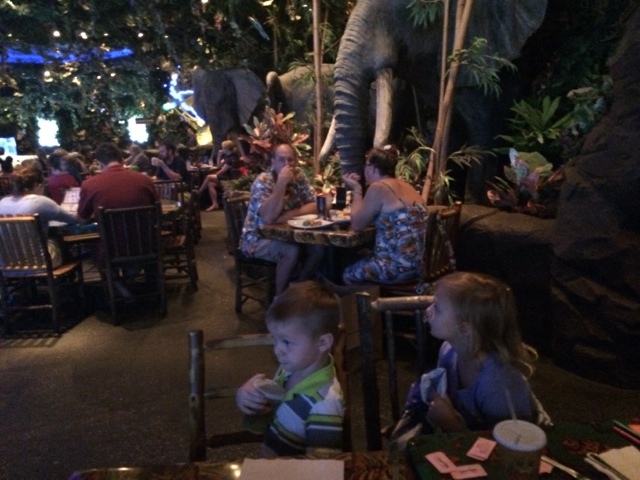 Sister was off meeting Matt Espinosa and other Viners at The House of Blues: 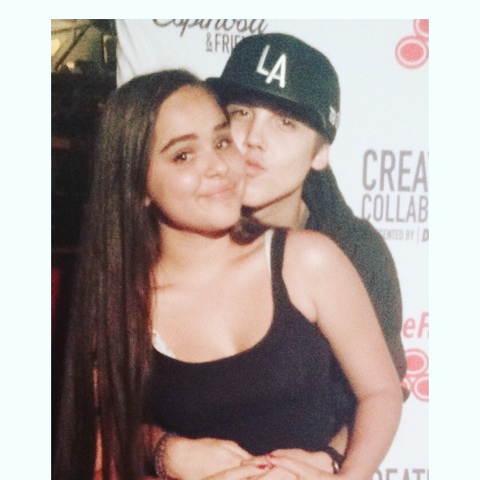 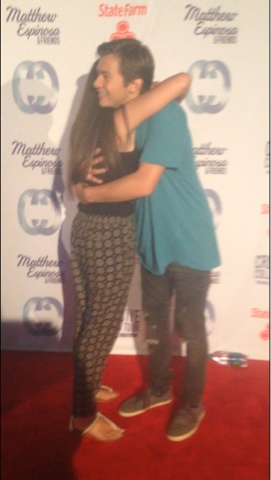 She gave one of the Youtubers sushi socks: 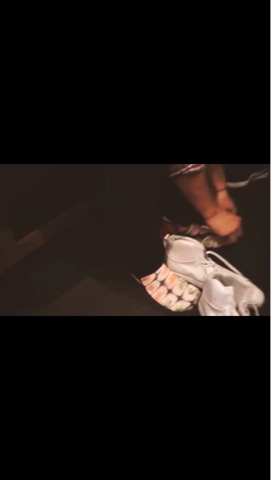 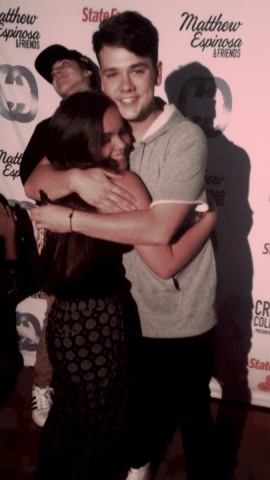 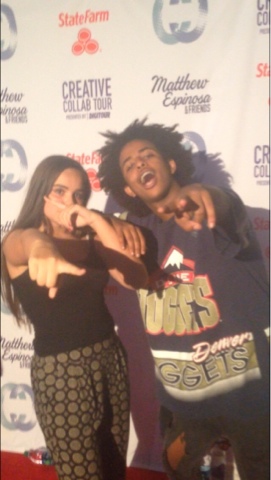 Sister earned this Meet and Greet for helping me so much with my little monkeys. I wish she was with me at downtown Disney because it was CRAZY, but I'm so glad she got to do something she enjoys. She deserves it!
Posted by Humble Hearts Academy at 8:24 PM