I would like to officially apologize for any posts that my dog may have made on this blog.  He feels entitled because he is in the 2nd grade at Humble Hearts Academy, which by the way, I DO NOT support.

He can't spell, his penmanship is HORRIBLE and he has not passed any subjects besides Military Science and Gym!!!! His dad INSISTED that he be promoted to second grade and I have no choice but to keep a positive mind set  and just pray that he shows SOME signs of improvement. 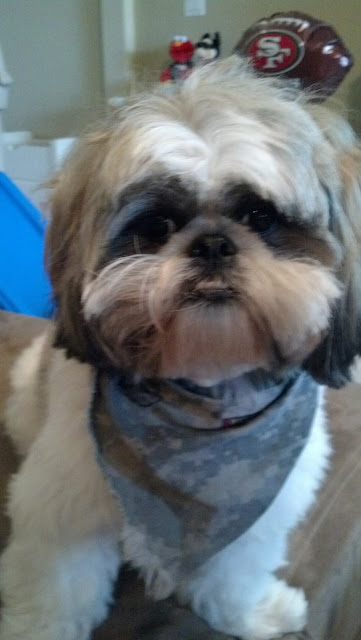 I would also like to say that contrary to what he said, he is NOT the real Justin Bieber and he has no business asking Dinovite to be their spokesperson! He has a serious lisp and most people can not even understand what he says.

Yes, he is extremely handsome, but that can only get you so far and it certainly will not qualify him to be the spokesperson for a major company!

Now, I have to say this in confidence...and I have no worries, since he is completely UNABLE to read...

He has a SERIOUS case of PTSD.

He has been on about 6 or 7 deployments at this point and he's just not completely there anymore.

On top of that, he has been dumped by about 10 ladies in the past few months. The worst break up was with  his ex-wife, Butchie (yes she is a girl). She was a bulldog who bullied him into marriage and then buried him with insults. She took whatever self-esteem he had and....well, now its just sad.

His current crush is Angie from Angie's List and I TRY to tell him that she is married, but he wont listen. He sits in from of the TV ALL DAY waiting for her commercial to come on and then cries until he sees it again.

He does have some GOOD qualities though...and for the off chance that he learns to read anytime soon I want to list them here:

1. He can eat a banana faster than anyone I know.

2. He is completely dedicated to the military.
The guy wont even let me wash his uniform.

3. He is a lovebug MOST of the time and he is always in the mood to cuddle...unless there is a German Shepard outside, or the mailman, or anyone running, or....well...scratch that...he rarely cuddles.

4. He LOVES his family with all his heart.

Email ThisBlogThis!Share to TwitterShare to FacebookShare to Pinterest
Labels: Gizmo